With giving back to the local communities in which it operates as a core principle of the Mackenzie Construction business, it has helped to improve and support many local causes over the last 40 years of its operations. One of these deserving local community causes, is Irvine Meadow Football and Community Club.

Former Managing Director of Mackenzie Construction, Brian Lamb, joined the club in 2016 and took on the role of General and Commercial Manager of Irvine Meadow on his retirement. His commitment to the role over the last few years has brought much improvement to the club, which has become increasingly involved in supporting the local community in Irvine.

In 2016, Irvine Meadow Football Club moved from an Unincorporated Club to a Not-For-Profit Community Interest Club (CIC), with a renewed focus on creating tangible community benefits to the area. To further enhance this strategy, a Community Club (IMCC) was formed, with the doors of the stadium being opened for the local community to use.

In the early stages of this transformation, the facility required some immediate maintenance in a number of key areas and there were real concerns over security and safety for those using the club’s facilities. In order to engage with new groups, a range of upgrades and improvements were proposed, and Mackenzie Construction gladly stepped in to lend its support for the project. Whilst Mackenzie Construction is Glasgow-based, it has many long-serving and highly skilled employees from the Irvine area and therefore, the transportation of building materials and support from the team was easily accommodated.

One of the first tasks carried out, was to bring the playing surface up to standard. For this, Mackenzie Construction donated turf and seed to patch up the surface, using excess from a recent environment project it had completed. It also arranged for one of its suppliers to provide grass cutting equipment. Excess hardcore was then supplied to fill potholes around the pitch, creating a usable and safe environment for club staff and players.

Another challenge which required immediate attention was that the main entrance gate pullers were unstable, and Mackenzie Construction provided the expertise of its Bricklayers to repair them.

In the months that followed, a former training area which had been neglected was returned to prime condition through external funding secured by the team at Irvine Meadow. Mackenzie Construction supplied some plywood Boards, sponsored large Stadium Boards and sourced new strips for the 1st team with sponsorship and backing from some of its key suppliers, who were also keen to support the initiative.

Another site of repair was the main stand, which was in poor condition with areas of cracked and crumbling concrete. The Mackenzie Construction structural repair division made quick work of this and repaired and sealed these areas, as well as replacing shattered glass panels with Perspex windows.

With the support from Mackenzie Construction and other local businesses to bring the amenities up to standard, The Irvine Meadow Community Club profile was enhanced, and this enabled more Community Groups to be actively involved in using the facilities.

By opening the facilities to the public, Irvine Meadow Youth was formed, and a network of Youth Football Teams began to thrive. From ‘early kickers’ (under 5) to an Under 20 Development Team, all using Meadow Park as their base, an increase in involvement with local schools soon followed and included annual school competitions and soccer camps at the club.

Additionally, the social club within the stadium has also been upgraded, which was previously a fairly dark and uninviting space. Mackenzie Construction provided resources over several weeks to assist with the building of an extension with windows and, more importantly, a fire exit to create safe evacuation routes for those using the club. The extension was built with a combination of donations from Mackenzie Construction and recycled materials to complete the building.

For greater accessibility, a wheelchair access ramp and wheelchair shelter were supplied, and reclaimed blocks were recycled and used to provide a flat footway for wheelchair access. Mackenzie Construction also provided concrete blocks and the expertise of its Bricklayers to build the structure of a brand-new disabled toilet, to further broaden the use of the club for the Irvine community.

To increase the age range of users at the club, IMCC set up a senior gentlemen’s group – The Wednesday Club. This group has built a membership of over 60 people and arranged for attendance at events to be opened-up to local nursing homes. In addition to this, a local Memories Group was created to support this group of club users and works in conjunction with Dementia Scotland and the SFA Football Memories project.

“Though there have been many areas of improvement to the Irvine Meadow facility since 2016, Mackenzie Construction has been our largest supporter in what continues to be an ongoing and ever-increasing Community project. The ongoing backing of the team at MCL has seen our club go from strength to strength. It has enabled us to build and grow a thriving hub of activity at Irvine Meadow, offering increasingly diverse opportunities and support to the surrounding area which makes a huge difference to our local community.”

“Mackenzie Construction is delighted to have provided sponsorship, expertise, materials and time to Irvine Meadow Football and Community Club and be a small part of its hugely impressive community success story. We’ve seen the difference that these upgrades have made in assisting its growth over the years and it has been a real pleasure for our team to be able to give back. This is a great example of one of our key principles of keeping community at the core of our work and how we can make a difference by supporting to the communities in which we live and work.” 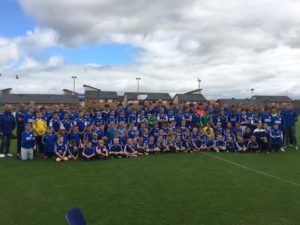 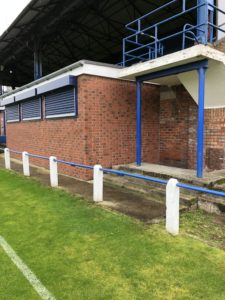 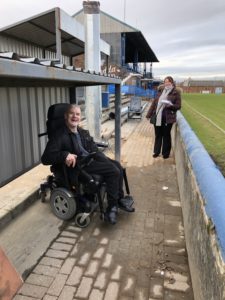