The North Glasgow Integrated Water Management System (NGIWMS) – Glasgow’s Smart Canal – has seen the creation of a pioneering drainage system to mitigate flood risk using the Forth and Clyde Canal, a scheduled ancient monument, with modern technology to support significant regeneration in North Glasgow. The creation of a ‘sponge city’ – a term used to describe how cities respond to surface water flooding – will see North Glasgow passively absorb, clean and manage rainfall intelligently. Advanced warning of heavy rainfall will automatically trigger a lowering of the canal water level via a SCADA control system to create capacity for surface water run-off.

The major driver for the project was a significant need for regeneration and housing redevelopment in areas of North Glasgow. Years of industrial change, fluctuating unemployment and a lack of quality housing has resulted in a number of social and health related issues with male life expectancy in the most deprived areas as low as 54.

Redevelopment in the area was seriously constricted due to a lack of water drainage infrastructure, with the River Kelvin and River Clyde both around 2km from key potential regeneration sites. The conventional solution was a 2km concrete tunnel to drain surface water directly into the River Clyde at a cost of around £40m, major community disruption and heavy carbon usage.

The NGIWMS solution was born in 2013 following a review into how additional value could be levered from the 18th century infrastructure of the Forth and Clyde Canal system. The idea was then developed through collaborative working as part of the Metropolitan Glasgow Strategic Drainage Partnership with Scottish Water, Glasgow City Council and Scottish Canals seeking the most sustainable way to utilise existing assets to enable resilient development. AECOM carried out the role of Principal Designer with Mackenzie Construction as Principal Contractor and Fairfield Controls providing specialist support to deliver the project.

The system feeds live weather forecasting data into real-time hydraulic simulation of flows, autonomously identifies extreme weather and proactively, through a SCADA control system sends commands to remotely open and close valves, close canal feeders and lowers, via three discharge points, the water level of the canal by up to 100mm. This creates capacity for 55,000m3 of surface water in advance of the forecast rainfall and provides a drainage system to manage rainfall events up to the 0.5% Annual Exceedance of Probability (200 year) event, including mitigating climate change impacts on severe rainfall.

The pioneering digital surface water drainage system unlocks 110 hectares of land across the north of the city for investment, regeneration and the much-needed development of over 3000 new homes within two kilometres of Glasgow City Centre, providing quality places for people to live, close to the economic heart of the city.

The use of the existing canal infrastructure has also seen massive CO2 efficiencies compared to traditional engineering solutions. Initial calculations indicate a capital saving of 5,000t CO2e and operational savings of 30,000t CO2e (equivalent to 85 million vehicle miles) over the lifespan of the project.

There has already been a wide level of dissemination of the project, with presentations of the concept at the World Canal Conference and the Scotland Flood Risk Management Conference 2020. The concept has seen wide recognition at industry award ceremonies, scooping awards for Sustainable Drainage & Flood Management Initiative of the Year at the 2021 Water Industry Awards, the ‘Greatest Contribution to Scotland’, award at the Scottish Civil Engineering Awards and Industry Transformation and Innovation Champion, and Initiative of the Year at the British Construction Industry Awards.

The NGIWMS concept is not just limited to the canal system, it is an integrated plan and includes significant opportunities for further development of approaches to surface water management and water-sensitive urban design in surrounding locations and regeneration areas. The potential to spread this technology for wider use around the world, is considerable. 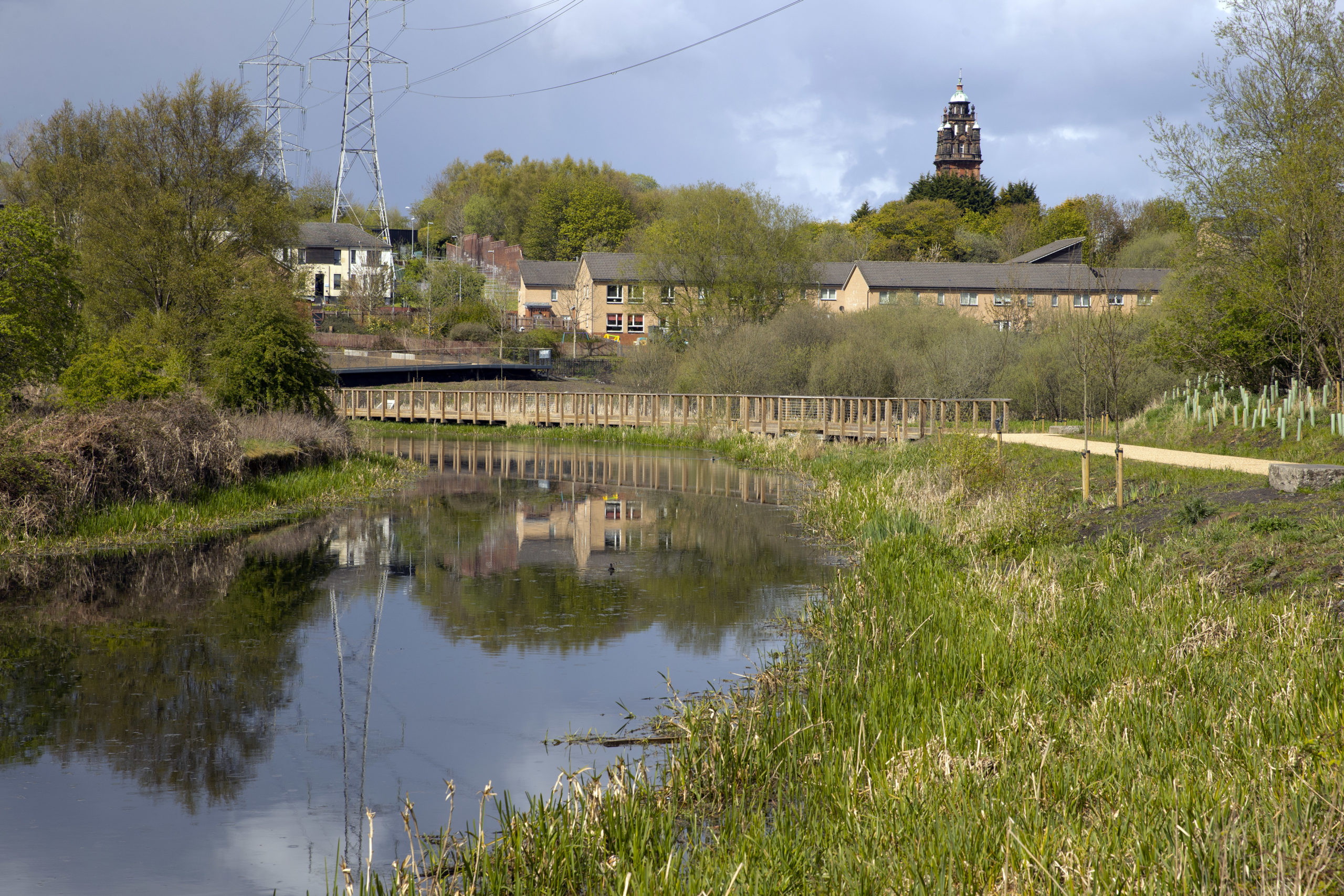